Battling For Peace With An Abusive Ex [Guest Post]

I am on a much-needed vacation. I've invited Angela Strong, a Christian novelist to share her story about finding peace in the midst of the war with her spouse. I think you will find her story helpful and encouraging. 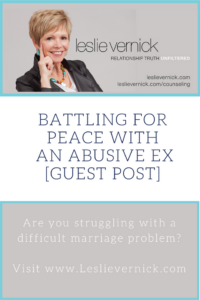 Though my first husband left me almost a decade ago, having kids together means I have to continue to deal with him. I’m told that these relationships get better with time, and that’s what I really want, but it seems like he uses this desire against me. If only I would (fill in the blank), then we would have peace. But when I do it, there’s still no peace. And somehow that’s my fault again.

I spent years wishing it really was my fault. Then I would have the power to fix it.

I didn’t realize I felt this way until we tried counseling together again a couple years ago. “For the children’s sake.” I couldn’t NOT try. But as our previous marriage counselor warned me, “He pulls you closer to punch you harder.” And punch he did.

In our recent counseling sessions, I cried about how he treated me. I didn’t want to cry, but I wanted to put down my weapons. I wanted a truce. So I let myself be vulnerable.

He berated me. I was “selfish” for thinking about myself. I needed to “put the children first.” I was “harming” my relationship with them. And he was so “concerned.”

Here I’d gone to counseling to work toward peace, and I was coming out even more wounded than before. I needed more help. I messaged Leslie Vernick for feedback and told her exactly what I was dealing with. That’s when I started reading The Emotionally Destructive Relationship and found the answers I needed.

The list of seven heart issues brought me much clarity. I saw my situation in many of the examples. Then I got to the evil heart. I read it with an open mind.

I mean, it had felt evil when my ex-moved to another state and tried to take me back to court to get custody. It felt evil when he reported me for neglect and my children were questioned at school. It felt evil when he gave my children the phone number for the police and tried to get them to call in on my teddy bear of a second husband. But he wasn’t doing that anymore. He’d divorced the woman I believe encouraged a lot of these evil behaviors, he’d moved back to be near our kids, and he was coaching their teams in a Christian sports league. He looked like he’d made the changes he needed to make.

But, according to Leslie, that’s exactly what the evil heart does. It tries to convince the world—and itself—that it is good. Then it doesn’t have to make any real changes. It can still blame me for our civil war. The example Leslie used in her book could have been replaced with our names. Finally, I understood.

Having my eyes opened to his heart issue meant I also needed to understand my own heart issue—the reason why I was so easily fooled. Fear. I had a fearful heart.

There was some pride there too. I didn’t want to look as bad as he was making me look.

And also some selfishness. You know, maybe if I played his game, I’d eventually get what I wanted.

But it was fear that kept me from protecting myself. Fear that kept me believing I had to step in front of his metaphorical speeding car to stop him from driving off the cliff of self-destruction. Fear that made me think I had to sacrifice my own health to save him for our children.

Sadly, I had good reason to fear. I’d seen children disown a parent when the other more charismatic parent had “concerns.” I’d seen kids legally change their names when they turn 18. My heart broke over it. But I couldn’t let that fear control me anymore.

When my counselor gave the analogy of being pulled in closer to get punched harder, I asked, “What do I do then? I can let him punch me or I can fight back, in which case, he’ll make me look like the abusive one. Either way, I lose.” My counselor responded with a martial arts lesson. He showed me how to sidestep.

I’m still learning how to apply the sidestep, which is what I love so much about Leslie’s books and the class I took at Safe Place Ministries based on her book. It teaches how to acknowledge your abuser’s combat strategy then look at your own position to see what needs to be done to hold your ground without attacking.

It’s also the reason I love watching Madame Secretary. I learn successful ways of negotiating with a terrorist.

“Peace is a beautiful thing. Making peace, not so much.” – Sec. Elizabeth McCord

I quit counseling with my ex. The final straw came when he told me that he didn’t leave me for the other woman, he left me because he hated me. We didn’t have the same goal. I was at a peace talk where any treaties signed would never be kept.

I still want peace just as much, but I’ve realized that the Bible never says to KEEP the peace. It says to be a peace-MAKER. I’m going to make choices that will create peace in my own heart. And I’m going to guard that heart with the double-edged sword that is the Word of God.  Click To Tweet

Book's like Leslie’s and groups like the one I attended at Safe Place are ways for me to be iron sharpening iron. We can stand firm together.

I may never have peace with my ex, but I will have peace. And that definitely is a beautiful thing.

Friends, what kinds of things have you learned to do to have peace in your heart when there is still war around you? 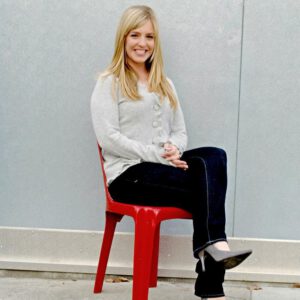 Angela Ruth Strong sold her first romance novel right before her husband left her. She then quit writing romance because she didn't believe in love anymore, but God restored her life, and now there's nothing else she'd rather write about. Her stories aren't only about a woman falling in love with a man, but about the woman realizing how loved she already is. They also demonstrate what Angela has learned about healthy relationships in an effort to help keep others from making the same mistakes she made. Find out more about her books and her divine romance at www.angelaruthstrong.com and join the fun of her fan page at https://www.facebook.com/groups/1557213161269220/

How Do I Read His Kindness?

Morning friends, I’m thankful to be writing this blog today. I was hiking on Saturday in a new area with a friend. We made all the mistakes a hiker shouldn’t make. We didn’t check out our trail ahead of time. We didn’t tell anyone what specific trail we were going on. We didn’t bring an…

My huband is a chronic liar. What can I do?

Q. I am a 39 year old wife and mother of 3 children with one on the way. My husband repeatedly lies to me and waits for me to find out, confront him, and finally admits then acts as if nothing happened. I have been married for 15 years and am at the end of…

Topic: Can I Set Boundaries with An Abusive Spouse?

Happy Memorial Day Friends, I have never had the privilege of serving our in our country’s armed forces but I want to thank those who have. It is a supreme sacrifice to be willing to lay down your life for the freedoms we often take for granted in this country. I have traveled to many…