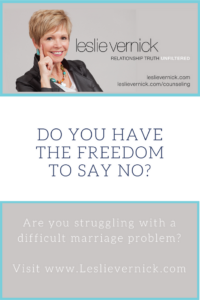 This week instead of answering a question, I want to share some thoughts with you about freedom. Today, July 4th is our country’s birthday. As a nation, our founding fathers fought for our freedom.

Today, however, our world often defines personal freedom as being entitled to have an unrestricted yes. People say, “I want to be free to do what I want, when I want, and how I want. I want the freedom to say what I want, without censure.” Freedom to these individuals means no rules or restrictions. They want to do whatever they want without anyone stopping them or judging them.

Recently I was watching the newest version of Beauty and the Beast with my three granddaughters. They asked me, “Nana, will Beauty fall in love with the Beast? Can she ever love him?”

I told them, “Not as his prisoner she can’t.” I don’t think they were quite old enough to understand, but it’s important that we do. Belle was not free to love the Beast until she was free NOT to love him.

If you recall the story, Belle was taken prisoner by the Beast. Over time the Beast came to treat Belle with kindness, he enjoyed her company, but she was still his prisoner. She was not free to leave.

Belle eventually pleaded with the Beast to be able to leave the castle. She wanted to be free to go find her father. Belle loved her father, not the Beast. But once Belle asked for her freedom, the tension escalated. Did the Beast love Belle enough to let her go? To release her from being under his control as his possession, his prisoner? He struggled to give her the freedom to leave him. But as we know, he did, demonstrating a true love for her.

God loves us enough to let us go if we want to go. He never forces our love or a relationship with him. He knows that forced relationships are not indicative of true love. Click To Tweet

Remember when the rich young ruler asked Jesus what it took to get to Heaven? He kept all the rules. He did everything he knew he was “supposed to do.” Jesus told him, “Give up your riches and come be my follower.” The rich young ruler said no, it was too great a cost. What did Jesus do next? The Bible tells us this: Jesus loved him, and let him go (Mark 10:17-22).

How does this idea of freedom, especially the freedom to say no apply to human relationships? When a baby starts to distinguish herself as a separate person from her mother, one of the first words that comes out of her mouth is “No”.  No, I don’t have to eat those peas. No, I don't have to come when you call me, I can run in the opposite direction.” A child’s no, helps her experience herself as a separate person from her mother, a crucial developmental milestone in her maturity.

Granted, this doesn’t mean a parent gives her 2-year-old child an unrestricted no, but a good parent allows her child to exercise her “no” without shame. She validates that her child has a right to make choices. “Oh you don’t like peas, let’s try carrots.” Or, “You don’t want to sit in the stroller right now, okay let’s walk. Hold my hand.”

Many of you have been shamed for your no. Not only by a parent when you were a child, but also by your husband, perhaps by your adult children, and even by your church leaders. You’ve been told or believed that a godly woman doesn’t say no to her husband, even when her heart is broken and her body is being used. That she has no biblical right to her no and it’s disrespectful and unsubmissive. Saying no to others is viewed as selfish or ungodly.

Recently on this blog, we’ve had quite a discussion on a wife’s right to say no to reconciling with her spouse after serious sin. Good points can be made and argued from both sides. One side believes that after someone shows the genuine fruits of repentance, reconciliation should be the biblical outcome. The other side believes once trust has been repeatedly broken, how can one ever know if the fruit of repentance is genuine or will last? Therefore the consequences of serious and repetitive sin in a relationship –including marriage, is broken trust that is not restored. And both sides are perceived as having Biblical support.

The point I want to make here is that God gives individuals the freedom to make those choices. Yes, he gives us his wisdom through the Bible, the Holy Spirit, and others and for most of us, we make the best decision we can based on what we know. In the Disney story, the Beast tried to control Belle and mandate their relationship. That never works. Not in a story, nor in real life. You can’t make someone love you.

Many of you would self-identify as people pleasers. No one has taken your no, you’ve voluntarily surrendered it. You have given up your freedom to say no in order to gain someone’s approval, attention, affection or love.  But is it worth it? As you’ve silenced your no, do you experience a more loving and secure relationship with that person? Or are you over functioning to keep them happy and loving you? Are you bending into their will and becoming what they want you to be instead of listening to who God calls you to be and following his will for your life? Are you surrendering your birthright as a child of God for a bowl of stew, a temporary feeling of well-being from another human being?

If so, don't despair. God has come to set the prisoners free. He tells us that the fear of man is a trap, a snare by which we can become captured by this fear of disappointing someone by our no (Proverbs 29:25). But to break free you may need some extra support and help.

I’m opening up spots in my Moving Beyond People Pleasing Class and would love to help you break free of your unrestricted yes and invite you to learn to say a firm yet kind no. Not because you are selfish or ungodly, but because you can’t have healthy relationships with someone without the freedom and ability to say no. Click here to learn more.

How Do I Handle My Friends Hanging Out With My Ex Husband?

Morning friends, I just returned from a long travel schedule from Nashville and Ancaster, Canada. Thanks for your prayers. I leave again Thursday for Akron, Ohio and am speaking Saturday all day on relationships, healthy, and unhealthy for women. I would love to meet you. Click here for more details.  Next week I head to…

Good Monday friends, I have some exciting news to share with you. I have been invited to be a regular blogger (2 x a month) for the Association of Biblical Counselors. I am going to be blogging about the same topics that I’ve addressed in this blog for years, but gearing it toward counselors and…

I’m disabed and my wife is neglectful and abusive

Hi, I had a wonderful week visiting with my grandbaby. She is so sweet and cuddly. I actually got to keep her overnight for one day to give my daughter a break. My daughter relished the break and said she fell asleep immediately and was unconscious the entire night. The weather in LA was overcast…