Am I Being Too Passive In My Marriage

We had a great time last week on Facebook Live talking about topics that will be covered at the CONQUER: Be brave, Grow Strong Conference in October. Over 400 women have registered so far and I would love to see you all there. If you’d like to watch some of last week, here is a link to the recording.

Today’s question is about being too passive. I think as women we often struggle with passivity and call it Biblical submission. But they are not the same thing. Being confident and assertive about who you are or what you need or want is not aggressive or selfish. It’s human. Of course, we don’t always get everything we want or need, especially when it’s in conflict with what someone else’s wants or needs, and that’s why all believers are called to practice submission. Submit to one another (Ephesians 5:21), to God (James 4:7) and to authority (1 Peter 2:13). Passivity and people pleasing are a huge struggle for many women and I am going to be offering an online class in a few weeks on tackling that problem. Its called Moving Beyond People Pleasing. If you’d like more information on it click here. 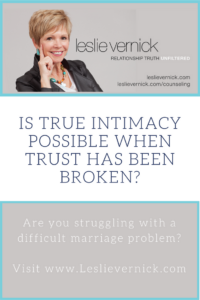 Question: I've been reading much of your material for the past several months as I try to “figure it out.” My wife shared you with me. This is the first time I am contacting you and feel very vulnerable. I'm sure you understand.

I have struggled with pornography and sexual addiction issues since I found my Dad's “stash” when I was 7 or 8 years old. It's a powerful hold on a man. Dang….. I'm a Christian man who loves being a father and husband and wanted/wants to do better than my father and follow Jesus whom I love.

I've totally come clean with my friends, family, and church…..from the pulpit as a former elder. I hid my struggle for such a long time but now am “out.” Refreshing for me but I understand that was the beginning of my wife’s/family’s journey.

We have 2 adult children and soon to be 4 incredible grandchildren. Dear God. As they run to me saying “Papa” it gives me hope that I can still make a difference.

I've been in recovery for almost a decade now thru a couple of incredible ministries that maybe you're familiar with.

New Hope in Lawrence KS with Darrell Brazell is an awesome resource. Also, the Watermark Community Church in Dallas TX ministry called Regeneration. Powerful. Both have a wonderful balance of grace and truth.

You're recent topic from a man whose wife avoided all intimacy is particularly sensitive to me.

My wife hasn't felt comfortable with intimacy for almost 6 years now. Not just sexual but she hasn't been able to kiss me during this time. I feel like a baby in a crib that wants to be picked up. Just the way it is. I ask on occasion but it isn't received well.

Honestly, sometimes I handle this well…lovingly…sometimes it is frustrating and I'm sure she feels that. I plan/try to be the man God wants me to me no matter what. It seems as if she won’t ever be able to be close to me again in that way. That is really hard but I am committed and will be “here” no matter what. I'm thankful she has been willing to stay with me also. No small thing for sure.

It feels as if I'm getting more “passive” in this area and I'm not sure that is good…but it is safer and comes with less hurt.

Thank you for any wisdom/ help/suggestions you can share my way. I know you deal with a lot of men who are selfish jerks. I've been there but have seen our God humble me during this journey. I have so far to go.

Answer: Thanks for reaching out. I suspect there are a lot of men who have gotten my material in one way or another and hang out in the shadows here trying to figure out how to heal their broken marriage. And I’m going to be working on a webinar soon for couples on how to heal broken trust.

Once trust has been broken, true intimacy with that person is impossible. You can have sex with someone you don’t trust, but you can’t have intimacy. Intimacy requires feeling safe and secure with someone. It is the ability to be vulnerable and not afraid of being mocked, rejected, or harmed in any way. I love the verse in Proverbs 31 where it says of the virtuous woman, “Her husband trusts her to do him good, not harm all the days of his life” (Proverbs 31:12).

But your question is more about you than about sex or intimacy. It’s about whether or not you are being too passive in this area of approaching your wife for more physical contact, wanting a simple kiss or hug.

My answer is yes. You are being too passive. But the solution to passivity isn’t aggression or to be more forceful in demanding physical affection from your wife. That would be abusive. I’d like you to learn to be more assertive with your wife with your words, by talking honestly with her about where your marriage is at instead of initiating or demanding more physical affection.

For example, have you initiated a conversation with your wife about the status of your relationship now that you have done your recovery and have been sober for almost ten years? Have you asked for and received her forgiveness? Is she willing to work with you to rebuild broken trust? Have you shared with her how her continued physical disinterest in you has impacted you?

Now that you have done your own personal work, have you asked if she would be willing to do couple’s work to repair and rebuild your relationship? All of these questions require you to be assertive, sharing your heart, your feelings, your thoughts and needs with her. Learning to be assertive is not demanding your own way or forcing someone to comply, even with a simple kiss. That is being aggressive. But passivity is staying silent about your feelings, your needs, or your thoughts but inwardly feeling sad, hurt, angry or resentful.

From what you wrote, it sounds like you are committed to staying sober and married; staying well, even if your wife is not as committed or interested in rebuilding your relationship. One of the consequences of repeated broken trust is that the person who has been repeatedly wounded is not willing to be vulnerable again. She is not willing to trust again. She may have forgiven you but she may not be willing to work to rebuild that trust. Therefore kissing you seems inauthentic to her and incongruent to where your marriage is. She doesn’t want to lie and pretend just to make you happy, but without really talking with her about it, you don’t know where her heart or mind is.

Therefore I’d encourage you to continue to do your work of maintaining your sobriety but also to learn to be more assertive in communicating with your wife. That may lead her to be more honest with you about where she is at and where your marriage is at.  It is only from that place that you can make the best decision on how to move forward with your life and marriage.

Friends, when you have found yourself too passive in your relationships and how have you learned to speak up for yourself in a non-aggressive way?

What Are You Holding On To

Morning friend, It’s been a crazy week.  Lots going on both personally and with ministry.  Our CONQUER membership is OPEN now until April 9th.  CONQUER is an educational and support group for Christian women in destructive marriages.  It will give you the support, wisdom and information you need to make the next right choices and…

Morning friends, I read a quote recently that has me pondering. It’s by Father Thomas Keating and it says, “There is no commandment that says we have to be upset by the way other people treat us. The reason we are upset is because we have an emotional program that says if someone is…

My mom died and I feel stuck in my grief.

Q. My mom passed away 9 months ago; 1 month after finding out she had pancreatic cancer. I miss her so much. I know she is happy and not suffering in Heaven and that comforts me, but I feel like I’m going crazy sometimes with her not here. I am not looking forward to the…