Am I Enabling And Is It Wrong To Stop?

Thanks for your prayers. This season is exceptionally busy for me and I’ve been feeling the pressure of overload. Plus, when you are doing remodeling, nothing goes as planned so the chaos continues. Hopefully, by summer we will be back to running normally around here. 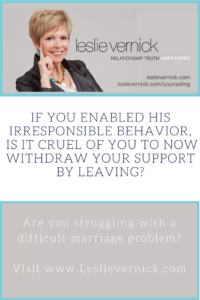 Question: Thank you so much for what you do. I have read your book and listened to many of your videos. After years of counseling, reading and praying, I cannot shake the belief that I am being selfish.

I’ve been married for 25 years. All 25 years I have worked to support our family. In the beginning, this was difficult for me, but I was willing to work toward my husband’s dream job. I worked while he built his business. I helped finance all of his projects at the promises that he just needed another year, etc. etc.

Here we are in the same position, only more expensive to accommodate his projects. Nearly all of his profits go right back into the business. It is mostly a hobby that pays for itself. There is no contribution to the household expenses. However, because the business is in the backyard, he sees it as helping with our “situation.”

I have trouble seeing it this way, so I become confused. Aside from the financial stuff, he is very short tempered. He is a schoolyard bully type that teases people for their flaws. He becomes angry if you show hurt feelings. He is loud, crude, entitled and cocky. He has an “I’ll hurt you before you hurt me” attitude. When he becomes angry with me he rages with insults and accusations about me, my family, my work, my hobbies and sometimes our children. He gets angry when I spend time with my parents. Teases if I go to church.

He tells me I’m “stepping out” when I take my mother to craft shows or go somewhere with a friend. He has disowned every member of his family. He hasn’t spoken to his own daughter from a previous marriage in nearly 10 years. He sleeps late in the day. He answers to nobody, no responsibility to anyone or anything. If he doesn’t want to do something he just doesn’t do it. I feel sorry for him.

He is like a child that gets so hurt that he has turned into a hateful person as a defense. He’s been diagnosed with depression and OCD (intrusive thoughts), anxiety and sleep apnea. He will go to doctors for a bit and then decide they don’t know what they are doing after he’s put little to no effort into treatment. He is very good at convincing me that his doing anything different is impossible, http://affectivebrain.com/?attachment_id=5775.

My question is if I know his behaviors are coming from past hurts and some mental issues and I still leave… doesn’t that make me the bad person?

Also, if I’ve enabled this behavior all these years, am I selfish and cruel to just abandon him? I’ve become his parent. I’m responsible for his wellbeing. After all these years I feel taken advantage of, sad, defeated and quite frankly…. Ticked. I can’t get away from the feeling of selfishness and guilt though.

Afraid that my kids will be angry especially if he turns to them for financial and dependence. How can I stay well, or leave well when he isn’t well in either situation?

Answer: I’m so sorry for all you’ve had to live within your marriage. Your husband sounds like a very difficult man to live with and relate to and you have tried to be compassionate and understanding as to where this all might stem from.

There are a lot of angles here but let’s just tackle two. The first is your fear of feeling like a selfish and bad person if you say enough is enough and leave.

The second area is related in that if you indeed enabled his self-centered and irresponsible behavior all these years is it cruel of you to now withdraw your support by leaving?

Some of my answers depend on how continuing to carry him impacts you? Any caregiver knows that being responsible to fully care for another adult’s needs can be exhausting and burdensome. I remember when my mother-in-law was caring for my father-in-law who had ALS. There came a time when she just couldn’t anymore. It wasn’t an issue of being selfish but became an issue of stewardship. Taking care of him was killing her and her body and spirit were breaking down. She needed to place him in a facility that could better care for his physical needs and she then also got a break from his negativity over his illness.

Right now you are struggling with negative emotions, resentment, anger, contempt and perhaps even disgust. These are normal emotions to feel when you are being perpetually taken advantage of, disrespected, demeaned, mocked and bullied.

Your emotions are telling you that something is wrong. Pay attention. The problem is not just with him or your marriage, but also with you. Most people when they start to fill up with negative emotions towards someone realize that they need to make some changes.

The changes can be drastic like ending the relationship, but they can also be less drastic or final by you having better boundaries for yourself. For example, saying “no” to new requests for money, or having boundaries around what you will listen to and what you won’t listen to when he gets negative and critical. Having excellent self-care routines and not allowing him to bully you or badger you into giving up things you want to do or doing things you don’t want to do is also important.

Here’s an analogy for you to ponder. If you were repeatedly getting your foot stomped on by dancing with your husband, the pain in your foot is telling you something is wrong. Ouch! At first, you might try to tell your dance partner that he needs to stop stomping on your foot. But when nothing changes and he keeps his stomping up, is it selfish for you to take care of your foot?

No! And, the only way you can take care of your foot if he won’t stop stomping on it is to stop dancing with your partner in the same way you. It doesn’t always mean you have to leave the dance, but you have to stop your part of the dance so your foot doesn’t continue to get stepped on. Therefore you might say, “I won't slow dance with you.” Or “I won’t dance with you where you hold me close because you continue to stomp on my foot and it hurts me.” We can fast dance or dance separately.

You do have good compassion for your husband and the hurts and probable mental health issues he struggles with. But this good quality of compassion may also be blinding you into taking more responsibility for his well-being and care than necessary.

Also, what are you doing to take care of you? He refuses to get help for himself but are you getting help for yourself? Have you stopped some of your enabling? For example, have you asked him to contribute to the household expenses or have you continued to pay all of them yourself? Are you still funding any of his dreams or are they totally self-sustaining through his hobby/business income? Are you indulging his temper tantrums or bullying or are you walking away?

The Bible says that we are to bear one another’s burdens (Galatians 6:4-6), which means we are to be unselfish when we see someone struggling beneath a heavy load. But it also says, each one should carry his own load. Click To Tweet

From what you say, your husband has never had to bear his own load earning a living to sustain himself let alone support a family. He doesn’t bear his own load relationally. He just cuts people out of his life if they require too much from him. He’s done that with his daughter and his biological family. I suspect he keeps you around because you give him so much and require nothing in return, not even a modicum of respect or appreciation. Your relationship is not mutual or reciprocal. Nor do you have the freedom to make good choices for yourself like go to church or visit your parents without receiving a heap of contempt from him..

So help me understand why you think it’s selfish for you to say “no more” to a grown-up man who is functioning as a 12-year-old boy? Maybe it’s time for him to face his own self and be invited to grow up through some tough consequences. Maybe it’s time to stop taking the mother role and let the chips fall where they may. Perhaps only then will he pick up his own load to do the hard work he has to move into adulthood instead of staying in selfish adolescence.

So, friend, I encourage you to get going to do your own work of understanding what your fears and obstacles are in stopping your dance steps with a man who continually hurts and demeans you. My guess is he’s a lot more resourceful than you know or even he knows but he’s never had to discover it because he’s always had a too compassionate dance partner who never said, “I’m not dancing with you this way because I do not want my foot crushed anymore.”

Friends, how did you let go of the guilt that you were a bad person when you stopped your enabling or over-functioning for someone who should be carrying his or her own load?

Am I Empathetic Or Enabling?

Morning friends, It’s a glorious day today at our cabin. We were in Phoenix over the weekend to bring our granddaughters home and it was pizza oven hot…..and draining. Drove back here yesterday and it is more pleasant. For those of you who are interested in the Southern Baptist Training curriculum that I’ve been working…

Morning friends, A puppy is coming on Saturday. I’m very excited, as are my granddaughters. I’ll post pictures next week when we pick her up. Her name is Addison, Addie for short. My granddaughters decided Addison if it’s a girl, or Edison, Eddie if it’s a boy. Grandkids are so much fun. They remind me…

We had a lot of responses from last week’s question about how to deal with a difficult person with love, honor and respect, especially when you don’t trust them. So this week’s blog is a follow up to that question with some practical suggestions on how to implement loving one’s enemy or doing good for…