What Biblical Grounds Are There For Divorce In The Face Of Abuse?

I hope you are registered for our webinar on Thursday on: Do People Use the Bible to keep you Confused, Stuck and Afraid about Your Destructive Relationship? To register click HERE.

Today’s question illustrates the spiritual confusion that can take place. 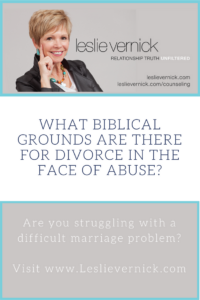 Question: What biblical grounds are there for divorce in the face of emotional, financial, sometimes physical and spiritual abuse?

Pastors are largely ignorant of the real issues behind domestic abuse and only cite adultery as the grounds. When married to a Christian, they often recommend to just remain separated.

In Canada, if the other party is unwilling to separate out finances in a separation agreement, filing for divorce is the only way to get financial separation. Pastors want to believe they are the authorities on the Scripture but many have little understanding about domestic abuse in a marriage. What biblical grounds could you cite that could be shared with leaders as grounds for divorce in a domestic abuse marriage?

Answer: I get asked this question a lot and I think the Church is slowly beginning to wake up to the reality of abuse and the necessity of thinking through this question a little more thoughtfully.

First, marriage was ordained by God to be a loving partnership. It is to be a picture to show us Christ’s relationship with his church. Marriage is a special and intimate relationship where safety and love are mutually expressed (Ephesians 5:22-32). Proverbs 31:12 says, “Her husband trusts her to do him good, not harm all the days of his life.” This is the picture of God’s view of marriage.

I think for a large part the church has been more focused on protecting the institution of marriage than protecting those who are mistreated within that relationship. And, when an individual in that relationship is repeatedly abusive, destructive, indifferent, and deceitful towards his partner, the church hasn’t really provided adequate answers for the injured spouse other than forgive and try harder to make it work.

Adultery is one place where most church leaders agree that there are Biblical grounds for divorce. However, there isn’t always agreement on what constitutes adultery.

However, adultery at its core isn’t about sex. It’s about a deep-rooted selfishness. It’s about wanting what you want and not caring that it will deeply hurt another person who you promised to love and care about. It’s about lying to get what you want or covering up what you did so that you continue to get the perks of married life with no consequences from what you have done. It’s about being controlled by your appetites and your emotions rather than by the Holy Spirit (Galatians 5:19-22). Adultery breaks the marital covenant of trust and does harm to the spouse, and the Bible says that is grounds to legally end the marriage.

So the next question we must ask is this. Are there other behaviors that also break covenant and harm a spouse that constitute grounds for divorce? Is it only sexual intercourse with another person that qualifies as adultery or did Jesus and God use the term “adultery” as a metaphor for acts of marital unfaithfulness that may be expressed through a variety of different harmful attitudes and behaviors?

The Old Testament law said adulterers should be punished by death, not divorce (Leviticus 20:10). So God must have allowed divorce for lesser “hardness of heart issues”.

God himself used the word “adultery” to describe his divorce with Israel for her unfaithfulness to their covenant but it represented a picture of her repeated idolatry and disregard for God, not a specific sexual act (Jeremiah 3:8).

When Jesus spoke to the religious leaders regarding marriage and divorce he knew that they were trying to trap him into contradicting Moses or endorsing their casual view of marriage and divorce (See Matthew 19). Jesus did neither. He talked about the sanctity of marriage but he also reinforced that divorce was allowed because of the hardness of man’s heart.

To interpret the Bible correctly, we not only have to look at the original languages but also need to look at the culture to which Jesus spoke. In Biblical culture, men had all the rights, women did not. Men could divorce women (for any reason), women could not divorce their husbands.

But there are two different words for the term divorce throughout both the Old and New Testament. Our English bibles translate one word as a certificate of divorce and the other word is translated simply divorce. When you read what the Bible has to say about divorce, notice when it says certificate of divorce or just divorce because they mean different things in that culture.

The passage that is normally used to prove that God hates divorce is Malachi 2:16. Here’s what the verse says in the NIV translation of the Bible. “The man who hates and divorces (notice the word choice – not gives her a certificate of divorce but simply divorces) his wife,” says the LORD, the God of Israel, “does violence to the one he should protect,” says the LORD Almighty. So be on guard, and do not be unfaithful.”

This kind of divorce, where a man abandons his wife is the kind of divorce God hates, not all divorce. Some divorces are necessary and allowed because of the hardness of one’s heart. Unrepentant sin separates us from God and from other people. Jesus reinforces this idea that unconfessed sin breaks relationships. For example, in Matthew 18 he says that if someone has sinned against us we are to go to him (or her) to begin the healing and reconciliation process. But when the other person refuses to listen and refuses to repent, the relationship changes. Jesus then says, “Treat them as a pagan or tax collector.” In other words, every Jew understood that there is no trust or intimacy or friendship with pagans and tax collectors. You treat them with respect, but you aren’t closely involved with them.

We also see God protecting women in several Old Testament passages when it comes to divorce. Read Exodus 21:11 and Deuteronomy 24:12 for some examples.

I believe that when a spouse is physically or emotionally abused, chronically lied to, treated in treacherous ways, or living with someone who is repeatedly unfaithful, she (or he) has Biblical grounds for divorce. The marriage covenant has been broken. An official divorce just makes that reality public and final. Click To Tweet

Long-term separation puts both spouses in legal nowhere land. They can’t remarry, but they aren’t reconciled. For some people, it might work but most individuals need the protection that the law provides so that one has access to a share of the financial assets that were accumulated in the marriage.

Churches can advise a woman to stay permanently separated and not divorced. Yet are these same churches willing to provide the backup plan to help her pay her bills, her medical insurance, and retirement needs if her husband spends their entire savings on himself while she was following their advice? I don’t think so.

So ultimately you have to take responsibility and stewardship for yourself, which includes your physical, sexual, spiritual, emotional and financial health and well-being. You can’t put your entire well-being in the hands of a counselor, or pastor, or doctor or any other professional or person without also using your own prayerful discernment about what the Bible says and what is the best course of action for you to take.

Thankfully in today’s culture, women do have more legal rights and laws are in place (at least in our country) to protect those rights. One of the purposes of our laws and government is to protect us from those who would harm us unjustly. (Romans 13:1-5).

Friends, how have you wrestled with the Bible and the question of divorce?

What Do I Do When My Counselor Overrules My Thoughts?

Morning friends, I’ve said this before but it bears repeating. I love this community and the power of the group contributing to the question asked. When I write my response to someone’s question, I cannot possibly cover every possible angle in the amount of space I allot.  That’s why I ask you all to chime…

How do we tell where emotional abuse ends and illness begins?

Good morning! I just returned from the American Association of Christian Counselors convention in Branson, Missouri. It was a great time and I appreciate all of your prayers for my time of speaking on Friday afternoon on The Emotionally Destructive Relationship. The room was filled to capacity with standing room only. I was so encouraged…

Sorry I haven’t posted. I’ve been ill and swamped

I’m sorry that I have been unable to answer questions the past two weeks. I’ve been sick with acute bronchitis, working on finishing up a book called Lord, I Just Want to Be Happy, and getting ready to go to Hungary to speak at a woman’s conference. I’m leaving May 13th and will be returning…