He Says He’s Repentant, But We’ve Been Here Before

Thanks for your prayers. I appreciate them. Our new carpeting gets installed this week and then our two bedrooms can start to be put back together. Bathrooms will still be torn up for another month or so but if at least some of the house gets put back together, I can function better.

Our 2018 CONQUER Conference Be Brave Grow Strong is coming up in October. I would love for you all to be there. For more information go here.

It seems that I’ve gotten a lot of questions around this same topic over and over again. Am I wrong to divorce and how do I know if he’s repentant? I’ve addressed it in various ways before, but in this blog, I’m going to take a slightly different approach in answering her question. 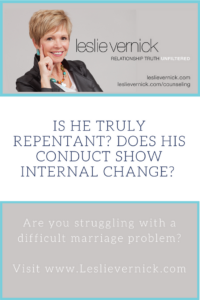 Today's Question: I left my husband of 27 years after yet another episode of out of control rage, this time witnessed by our 24 yr old daughter. It was because of her that I was able to get away from him that night.

I later read your book and it confirmed to me what I had thought over the years that he is an abuser and it's not going to stop. I filed for divorce.

My question is this. He says he has repented and wants our marriage to get help. He says it's not just him but I have issues too. All the same stuff I've heard a hundred times.

Am I wrong for going ahead with the divorce? We have tried counseling and lots of intervention over the years. It always seems to work for a while and then the same patterns start all over again. He says I'm disobeying God if I divorce him. I've been gone almost 4 months. I can't imagine going back. Every time I have in the past it makes it harder to leave again?

Answer: No, you are not wrong going ahead with the divorce. You have given him plenty of time over the 27 years you have been married to prove that he is committed to changing his abusive ways but he keeps returning to them.

His goal right now is to make you feel responsible for ending the marriage instead of him seeing that it was his consistent lack of change that has brought you to this point. He also wants you to feel guilty and afraid so you will question your decision to end your marriage. He does this by injecting confusion into the narrative with bits of truth and lots of conjecture.

For example, he starts by telling you that he’s not the only one with issues so therefore by implication, you have no right to say, “I’m done being abused.” Of course, you have issues. Everyone has issues. But he wants you to question your boundary around “I will not allow myself to be abused.”

The other misleading thing that he says is that “he’s repented and wants your marriage to get help.”  What he’s implying is that his abuse is not the real problem here. The problem is your marriage and your issues. And if you got help for your issues and your marriage improved the way he wanted, then he wouldn’t abuse you. What he’s saying without saying it is “See, it’s your fault and the marriage’s fault I acted that way.”

It’s so sad. After all this time, he still does not own or take responsibility for his own entitlement thinking or abusive behavior.

His mindset and even his language is very typical of the “Christian-ese” abusers as well as some well-meaning people helpers use to keep a Christian woman confused and stuck. If they can get her to question her decision to end the marriage and get her fearful that God will disapprove of her decision to end the cycle, then she will stay put and give it another chance.

Please understand this pattern is an observable cycle. Lenore Walker, a psychologist, and originator of Survivor Therapy designed a cycle of abuse that has been a standard over 30 years to help women develop a safety plan.  It looks like this: 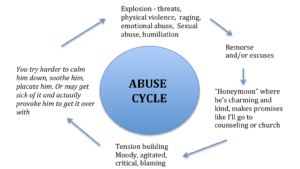 Here is where I want you to pay attention. On the right side of this cycle soon after the explosive incident an abuser often appears contrite, remorseful and willing to change. He may promise to counsel, to go to church or anything else she would require in order for her not to leave or call the police.

Here’s where a wife becomes convinced that her husband realizes that he crossed the line and of course he’s repentant and won’t do it again. But then in a few days or weeks or months, the cycle starts up again within the tension building stage. And then there is another explosive incident. The tension can be real or imagined like “you’re having an affair.”

Sadly many pastors and people helpers mistake the right-hand side of the cycle, the contrite or remorseful stage to be signs of growing awareness and repentance but in most cases, it is not. It’s the honeymoon phase of the same abusive cycle.

The abuser can be quite charming, loving, and kind during this phase of the cycle. It doesn’t mean he’s changed just because on the right-hand side he’s behaving better. It’s still the same abuse cycle. Click To Tweet

That’s why when you’ve been in counseling, things got better for a bit because the honeymoon phase lasted a bit longer than previous times because of accountability. However, there wasn’t genuine internal change in the way he sees things. We can tell by the way he is talking to you now.

When you look for the fruit of repentance look ONLY at the left-hand side of the cycle. Pay attention to what happens when the tension stage starts up.

In every marriage, there is tension at times. There are days of stress, kids leaving a mess all over, dinner not being ready on time, clothes not picked up from the cleaners, financial difficulties, marital fights. But there isn’t abuse that follows. There may be a timeout, a marital fight that doesn’t result in abuse, or sloshing it out until some agreement is reached.

In a non-abusive marriage where both partners are respectful and loving with one another, there is still tension at times. But they would own it. “I feel stressed out today, I need to go for a walk” Or, “I’m crabby and it’s probably best we don’t have this talk right now.” They don’t use abusive behavior or speech as an outlet for their stressful feelings.

And you might even notice that your spouse doesn’t ALWAYS use abuse when he gets stressed. For example, how does he handle himself when someone is visiting your house or when he’s out in public? He has a lot more control over his abusive behaviors than he takes responsibility for. Abusers abuse because they can.  And when consequences come down hard on them like the death of a marriage through divorce, they are the first ones to blame the divorce on the wife who wouldn’t just continue to put up with it again and again and again. Don’t be fooled.

In summary, if he is truly repentant we want to see an abuser begin to catch his own self when he is getting worked up and tense. We want him to pay attention and self-correct just like a healthy man would do if he was getting a little loud or gruff or disrespectful.

A second thing we want to see is this. If he was not paying attention to himself but you started to notice that he was getting tense and short-tempered, he would now be open and grateful for your feedback. You would have the freedom to say, “You’re scaring me right now.” Or, “I think you need to take some time out and cool down.” And he would listen to you and do it instead of repeating the abuse cycle with a new incident of abuse.

If these two things aren’t in place on the left-hand side of the cycle – a growing self-awareness and a willingness to receive the feedback of others, repentance and change are not happening. I’m reminded of the Apostle Paul’s words in Philippians where he says to other believers, “Dear brothers and sisters pattern your lives after mine, and learn from those who follow our example. For I have told you often before, and I say it again with tears in my eyes, that there are many whose conduct shows they are really enemies of the cross of Christ” (Philippians 3:17,18).

New conduct is what you are looking for, not words or empty promises.

Friends, have you been fooled by your abuser's charm on the right-hand side of the cycle but saw no real changes on the left-hand side?

Help I Don’t Want to Make the Same Mistakes

Hey friend, this is Coach LeAnne Parsons and I’m going to be answering this week’s question. I’ve been on Leslie’s team for 2 ½ years now, and I am passionate and committed to walking with women as they grow in relationship with themselves, God, and others. Together, we reclaim our voices and our brave in the relationships…

Am I Enabling Or Enduring (Poorly)?

Morning friend, We had a great CONQUER workshop last week and I hope you got a chance to attend. Our doors are open until this Friday. If you’re interested in checking it out, click here. This week’s question: My husband struggles with anxiety disorder, is controlling, and acts harshly with bullying, criticizing, or the silent…