Did I Enable Sexual Abuse?

I love to travel but it is always good to be home. There is something very soothing about a normal routine – and your own bed and pillow that just does a body good. Sigh…..

Registration for our first LIVE CONQUER conference, “Becoming the Best Possible You both Inside and Out” is right around the corner. Registration opens June 1 and we hope you will decide to join us October 14 and 15th 2016. This is a live, in-person, Women's ONLY conference. CLICK HERE to be notified when it's open.

You do NOT need to be a CONQUER member to attend. All the details will be available next week and the first 100 women who register will receive a personally signed and numbered print of a painting I did specifically for this conference. One conference attendee will win the original.

I can't wait to meet all of you in person. Put it on your calendar to attend. 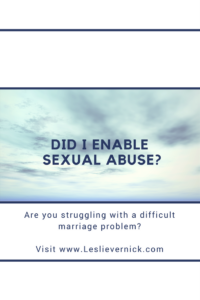 I had the privilege of watching your webinar recently and enjoyed some insight in this clip…..and now I have a question. My husband sexually assaulted me over a year ago. He thought that I was leaving him and felt it necessary to ‘demonstrate' to me how good we were together.

I was fearful and gave into him, as often saying no to him meant he would tell me I wasn't normal. My family became aware of the situation and went to the police who later called me and asked if I would like to talk with them.

I realized that things were quickly spinning and I declined to talk with the police saying that I needed to first talk to a counselor to make sure I wasn't going crazy.

I was blinded by disbelief and could not grasp this as being abusive. His calling me not normal had become so repetitive through the years and I believed it. I never follow-up with the police. My husband found out about their involvement and has accused my family of being crazy. He told me that a police report like that would make him lose his job and that would hurt our family because we wouldn't have money.

He also said that children's aid would get involved and our children would be taken away. In the subsequent year, my husband denied doing anything wrong. He has told family and friends that I am mentally ill and even satanic.

My question is, did I enable his behavior because I didn't stick up for myself and ultimately shielded him from the law because of the fear he instilled in me with regards to money and my children?

I struggle with this daily and welcome your comments.

Answer: First I am sorry for what you've been through. Your story is not the first one told on this blog of sexual abuse in marriage but it always breaks my heart to hear it.

It's curious to me how the one who does the wrong so easily twists things to look like you are the cause of the disastrous consequences (job loss, money problems, perhaps jail time, Child Services being involved) if you simply tell the truth about what happened. Obviously, he knew he crossed the line when he violated you, not to mention he knew he broke the law or he wouldn't have been so worried about you talking to the police. That said, your question is really about your part. Did you enable?

We've just had two blogs about fear, how it can capture us, muzzle us, and beat us silly with its lies. Here are some of the lies I hear you falling for.

Lie # 1: I'm afraid I'm not normal if I don't want to have sex with my husband every time he wants it. Something is wrong with me.

Truth: In a healthy marriage, a couple's sex drive may vary. It is not abnormal for men to have a higher sex drive than a woman, nor is it abnormal for her to not want sexual relations as much as he wants.

When a woman is in an unhealthy and/or destructive marriage her sexual desire for her husband diminishes considerably. Having intimate relations with a person who treats you like you are stupid, crazy, satanic, a pain in the neck or ugly feels not only wrong but also oppressive to your soul and spirit, let alone your body.

When a man watches a lot of pornography, women are portrayed as panting after any man who will have her. In the video, her sex drive rules her and she is insatiable. As he saturates his mind with pornographic images, this is what becomes his “normal” woman. A total fantasy.

Lie # 2: I'm afraid I'm going crazy when I feel strong emotions inside. I can't trust my own mind to tell me what's wrong and what's right, what's good and what's bad. I have to let my husband decide that.

Truth: Our emotions of fear, anger, anxiety, hurt, sadness, and confusion are warning bells. They are telling us something is wrong. Something is either wrong with us inside, or something is wrong with our environment on the outside. Either way, we are to PAY ATTENTION. We shouldn't ignore our emotions and shut down or minimize them. And, we shouldn't allow our strong emotions to completely take over the decision-making function of our lives or we can make some big mistakes we deeply regret.

Your emotions are telling you that there is a problem you need to face. Pay attention. There is a good anger and fear at being wronged, oppressed and abused. How we display that good anger or fear makes a difference, but anger, hurt, and fear are the appropriate emotions you should be feeling.

Lie # 3: It's my fault if things fall apart at home (financially or legally) if I disclose that he sexually abused me. If I don't disclose, it's my fault he did this because I've enabled him over the years.

Truth: First sexual assault is a crime and you did nothing to enable that. Women and children are sexually assaulted every day and it is devastating to their sense of self. You may have been afraid (as any person would be who is being sexually assaulted), but that did not enable him to do it. He was going to do it: period. He decided, not you. You could have fought him, some women do. But that doesn't mean he still would not have assaulted you.

Second, if things fall apart at home because you told, it is not your fault. You don't have the power to put people in jail or make your husband lose his job. But judges and police do. And, if you told the truth and the result was that your husband lost his job and/or landed in jail, the fault lies squarely on him for what he did.

However, that does not mean that if that happened, it would not cause you hardship.

Sin hurts people and the consequences of sin don't just fall on the sinner, they often spill over onto the innocent victims of someone's sin.(tweet that)

Third, you are enabling your husband in certain ways and if you want to get healthy and stop, you must begin to change you. By staying silent about what's going on, you enable him to become a bigger bully, a bigger liar, and more and more self-deceived.

He's now rewritten the story of what happened in his mind, telling himself and others, “I didn't do anything wrong. She's the crazy one. She's satanic.” Romans 1:25-28 says that the more we exchange the truth of God for a lie, the more one's mind becomes depraved.

By staying silent and not going to the authorities that God has put in place to protect you and your children, you enabled your husband to continue to lie to himself, avoid the consequences of what he did, and perhaps in those very painful consequences of job loss and jail time, he would have woken up and repented.

It would be tempting here to beat yourself up for not being strong enough to take that action. Don't. It's just another tool of the enemy to accuse and attack. God knows you've been suffering from this question daily. He led you to watch the webinar. You are waking up to what really is. This is God's grace for you. He will lead you out of confusion and fear and empower you to walk in truth and love.

Get support for yourself now. Grow. Learn to walk in CORE strength. Your husband hasn't changed. There will be other opportunities for you to take a stand. Hopefully not another sexual assault, but now that you know, get yourself strong enough to do something different.

Friends: When you woke up to your own enabling ways, what helped you the most take those first steps of change?

Am I Crazy for Not Being Thrilled With His Changes?

Morning friends, Be sure to visit my home page and watch this week’s video describing the difference between a difficult, disappointing and destructive marriage. Each week on Monday I will post something new. I just received some advanced copies of my new book, The Emotionally Destructive Marriage:…

When is Enough Enough?

Morning Friends, This weekend I’m headed to Branson, MO for the American Association of Christian Counselors Conference.  I’ll be speaking Friday morning. Pray that my presentation goes well.   There are a lot of people signed up for it (over 300) so please pray that I feel better and get there without delays. I’m going to…