Topic: A Wife Can’t Trust, A Husband is Repentant.Now What? 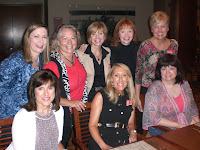 Whew, it’s been a whirlwind week of travel, counseling, coaching and writing. I attended Logos Bible Software boot camp last week to learn their software. We were treated so kindly by the entire Logos staff. I had the opportunity to visit with amazing women ministry leaders who wanted to study God’s word using this software.

In the photo above are just some of the women I had the privilege of studying with. They are (bottom left to right) Sharon Jaynes, Karol Ladd, Jennifer Kennedy Dean, (top left to right), Linda Evans Shepherd, Pam Farrel, Me, Carol Kent and Jennie Dimkoff. For more pictures, visit my facebook fan page.

I wish I could tell you I got home and became a bible study wiz, but alas my menopausal brain only could retain a fraction of what I learned but thankfully they gave us printed manuals that I can refer to again and again. But I have at my fingertips tons of commentaries, Greek language studies, dictionaries, various translations of the bible, maps, sermon notes and everything else my heart could imagine.

Pray for me. I can easily become overwhelmed with the responsibilities God has given me.

Today’s Question: I have been facilitating support groups for sexually sinful men for the past 14 years. We added a wives support group 12 years ago. We have had men referred to us by their counselor, pastor, or by their own wife. The deep stabbing pain a wounded wife feels over her husband’s betrayal is overwhelming. I am not able to understand my wife’s pain or entirely why she chose to stay with me in spite of the pain. We are both glad she made that decision from the first day back in 1994.

Many of the men I deal with struggle with a level of narcissism that is often comical. Their childish behavior, the petty lies and the denial that he wasn’t as bad as other men does not impress a wife. On occasion we are blessed with a man who gets it. He knows his actions will be the true indicator of how well he is recovering.

Answer: I am always thrilled to hear how God takes our worst sins and failures and uses them for his glory and to help other people. I am glad you and your wife have done the hard work of healing and are bringing the good news of restoration to other couples through your support groups.

You don’t mention the particulars but you do give a few clues that I want flesh out.

First you say that her husband is working hard and appears to be doing the right thing, but he is not getting the results he wants – his wife’s trust. My concern with your question regarding what he should do next makes me wonder why the husband is doing what he’s doing?

In other words, his actions, even though they look right, still seem much about him. Getting his wife to trust him, love him and forgive him so that he has a better marriage. If he doesn’t get those things, will that mean that he stops trying to love his wife and to earn her trust?

Again, using the analogy of a wife being paralyzed by her husband’s reckless driving. If she forgave him, they could live with the paralysis but she still might be fearful for a long, long, time whenever she is driving with him. As long as he continued to be patient and compassionate with her lack of trust, knowing that his past foolishness caused her great pain and consequence, they would be able to have a loving relationship.

Friends, you who have lived this journey first hand – what are your recommendations?

How do I know if my spouse has really changed?

Monday July 26 I’m sitting in a hotel room in the Wisconsin Dells. My husband is here for a national volleyball tournament and he is off with his responsibilities. I’ve been reading a lot this summer and I want to recommend two great books for you. The first is Sarah’s Key by Tatiana de Rosnay….

Part 2 – Continued discussion about how to respond in marital distress

In this week’s blog I’m not going to answer a new question, but rather I want to continue the discussion Amy and Anonymous have generated from last week’s question. So if you haven’t read last week’s question and answer, scroll down to read it because the way we think about these things is critical. Anonymous…

Am I enabling my new husband and understanding God’s perfect will?

Good Monday morning friends, I want to invite you to my very first webinar on Wednesday, February 1st at 9:00 PM ET. Far too many people think that they have to suffer in order to live a God-ly life. They find themselves wallowing in negative feelings, dealing with feelings of overwhelm and experiencing intense sadness….