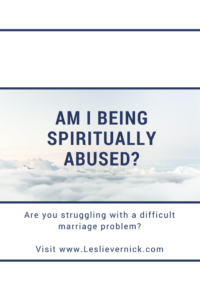 If you are to love your husband, what is in his best interests right now? Is it to submissively collude with his idea that he can do all the thinking for you? Is it to silently stand by his side and throw the stewardship of your own life and mind in the trash? Or, is it to take him up on his own words and use your voice to calmly and clearly say, “I disagree” or “No” or “I don’t want to” or “I don’t like that” or “I don’t believe God’s word says that.” Perhaps his biggest need right now is to see he can’t be God for you. That is idolatry for him and for you.

Does your husband demonstrate a servant’s heart? Does his head knowledge of theology translate into the application of service towards others? If not, I would question how “spiritual” he truly is. Satan knows more theology than you or I do but he does not follow or submit to God. As studious as your spouse is, his application of Biblical truth seems selective to the things that serve his desire to control and to judge.